Kilmacabea U14’s played the final of the West Region U14B2 league on Sunday 4th November 2018 in Aughaville against Urhan. Urhan were first out of the blocks with a point in the first play, but Kilmacs settled and registered 1-2 in quick succession. Some good defending and goal mouth clearances from Patrick O Driscoll and Tyler Abbey Henning kept the Urhan scored down at half time. Padraig Gore in midfield was linking well with Liam McCarthy and Cillian Whelton who were showing well and putting the scores on the board.

Kilmacs led at half time but were finding it hard to put a good Urhan team away in the 2nd half. It was score for score throughout the third quarter but it was the Kilmacs who found an extra gear to finish stronger and record a welcome victory on a scoreline of 7-14 to 6-5.

This victory was just reward for this bunch of players who worked and trained hard through the year. Mark “Captain Cooke” collected the league trophy from Kevin Green (Rebel Og West) and thanked his team mates for their dedication through the year and also thanked the management of Sean Tobin, John McCarthy, Kevin Cooke and Kevin O Driscoll. 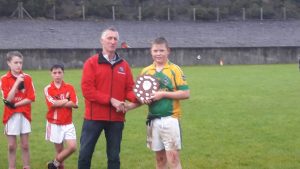 This site uses Akismet to reduce spam. Learn how your comment data is processed.

Kilmacabea is a Gaelic Athletic Association club based in the villages of Leap, Glandore and Connagh in County Cork, Ireland. The club is affiliated to Cork GAA and plays in the Carbery division.